You are here: Home » Are Smart Meters Unsafe? 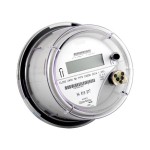 We live in radio-saturated environment; even the electrical products we use generate some radio interference. In Canada, the airwaves are governed by various statutes and regulations: Unintentional radiators such as PCs, household appliances and electronics have to meet Industry Canada interference limits to legally be put on the market, simply to protect our  communication infrastructure from accidental interference.

Other Industry Canada interference regulations apply to all intentional radio sources, such as Cell phones, personal radios, mobile and wireless devices as well as Smart Meters. Additionally, overlying safety (human exposure) regulations apply to Intentional Radiators, mandated by Health Canada’s Health Code 6, to protect the general public and radio professionals from unsafe levels of radio energy there was no extraordinary radio energy emitted – even in the worst-case scenario of dozens of meters continually transmitting in a lab mock-up. Indeed, in this condition and at only 20 cm away from the panel, their was less peak radio energy than from someone chatting on a cellphone just a meter away, or the amount of any FM radio station, measured at Davie and Cardero, in Vancouver – our baseline typical radio ambient sweep. 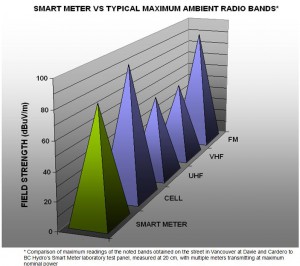 Smart Meters only transmit for a few seconds a day, never continuously and never all at once. The lesson is that our communication infrastructure already bombards each and every one of us unrelentingly with radio energy, yet governments are selling more and more radio ‘bandwidth’ to feed the ever-increasing demand: Smart meters may appear to be a straw ready to break the camel’s back; but all the while, consumers demand for state-of -the-art wireless communications infrastructure is heaping on the hay by the bundle!

The investigation shows that, as tested in the provided `worst case scenario`, BC Hydro’s Smart Meters pose no threat of illegal radio interference, or health hazards according to Canadian regulations.

Stay tuned to CBC’s The National because Protocol EMC’s own Rob Stirling will be presenting his full report on Smart Meters.